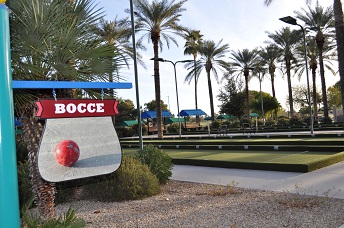 The sport we call Bocce has its roots in a game played in ancient Roman times. It has become popular throughout the world and is related to lawn bowling, the French game of Pentanque, and even in South America as Bocha or Bolas Criollo. Its popularity in America has been steadily growing since 1989. It is a part of the World Corporate Games, an event in the Special Olympics, and is being proposed as an event in the World Olympics.

Here in Sun City Grand we have over 800 residents who belong to the Bocce Club. Most play in one of forty-seven leagues, some beginning in October, November, and January. Members of a league play once weekly for fourteen weeks. If you do not wish to commit to regular league play, substitute players are welcome and needed and it's an ideal way to begin to learn how the game is played and to determine if it is an activity in which you may be interested. More information is available by contacting the League Coordinator (see Officers page.) Additional information is posted on the board by the bocce courts and in the Chaparral Center near the library.